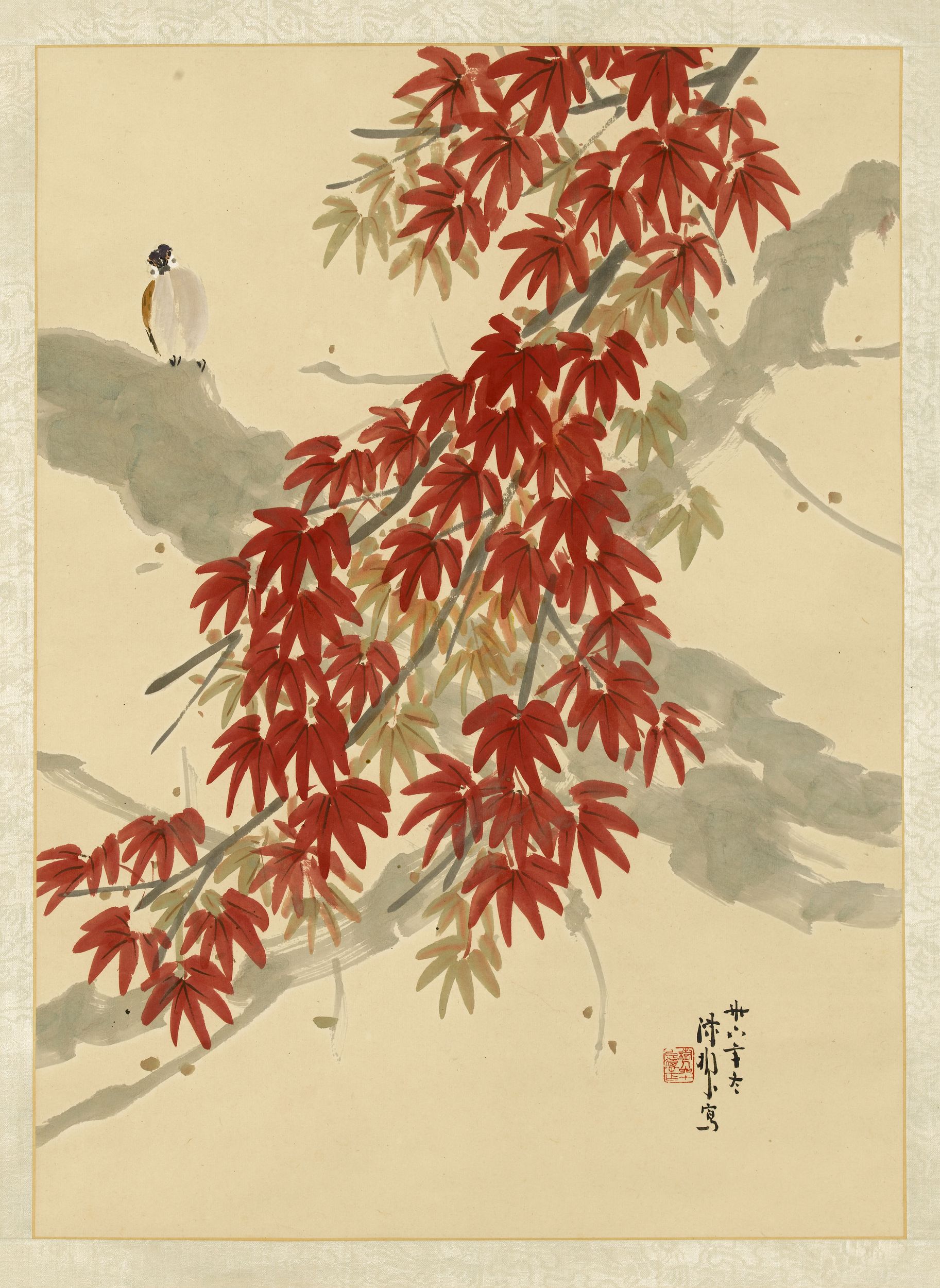 Inscription and signature : 三十六年冬,陳樹人寫 “In the winter of the thirty-sixth year [1947], painted by Chen Shuren.

Chen Shuren is one of the leading figures of the Lingnan School, with Gao Jianfu 高劍父 (1879-1951) and Gao Qifeng 高奇峰 (1889-1933). Like Gao Jianfu, Chen Shuren studied painting with Ju Lian 居廉 (1828-1904), the leading bird-and-flower painter working in Canton (Guangdong) in the late 19th century. From 1904, he published his first articles hostile to the imperial regime. In 1905, he joined the Tongmenghui 同盟會 movement founded by Sun Zhongshan (Sun Yat-sen) 孫中山 (1866-1925). In 1906, he left China to study applied arts and painting in Japan, where he stayed twice, from 1906 to 1912 and from 1912 to 1916. After discovering the experimentations of the Japanese school of Nihonga 日本畫 and Western painting techniques, he collaborated with Gao Jianfu and published work in his journal, Zhenxiang huabao 真相畫報. His political commitment led him to exercise an active role in the Kuomintang. From 1917 to 1922, he represented the party in Canada; on his return, he occupied important positions on the political scene in Canton.
His artistic work developed alongside his political activities. In the course of the travels he undertook regularly throughout his career he painted famous sites, while continuing to practise the bird-and-flower painting genre. In the 1930s, he took part in several exhibitions in China and in the West, and participated in artistic debates in numerous painting societies that emerged in this period. In the last years of his life, his writings on art and his role as a protector of young painters gave him special authority on the art scene of the 1940s.
The composition of Red Maple Leaves is typical of Chen Shuren’s work. It is a traditional subject that nevertheless reveals the painter’s interest in studies of the motif. Leaves and branches irrupt naturally into the painting. The way the branches intertwine to form a cross in the centre of the sheet is a structuring element common to several of his works, including the 1947 chrysanthemum painting in the Cernusuchi Museum. The use of the vivid red colour was used by Chen Shuren for certain subjects. One of them was studied by Li Weiming: kapok flowers, which he regularly depicted from the 1920s. For Chen Shuren this motif was closely connected to his native region of Canton. The red maple leaves, which also feature in numerous compositions, often appear with a small solitary bird. Chen Denxin has shown that this motif, painted for the first time in 1932, was a metaphor opposing the fragile bird with the brute force of its predator. Chen Shuren was evoking the assassination of his son Chen Fu 陳復 (1907-1932), apparently organised by Chen Jitang 陳濟棠 (1890-1954), the military commander in control of the Canton region.