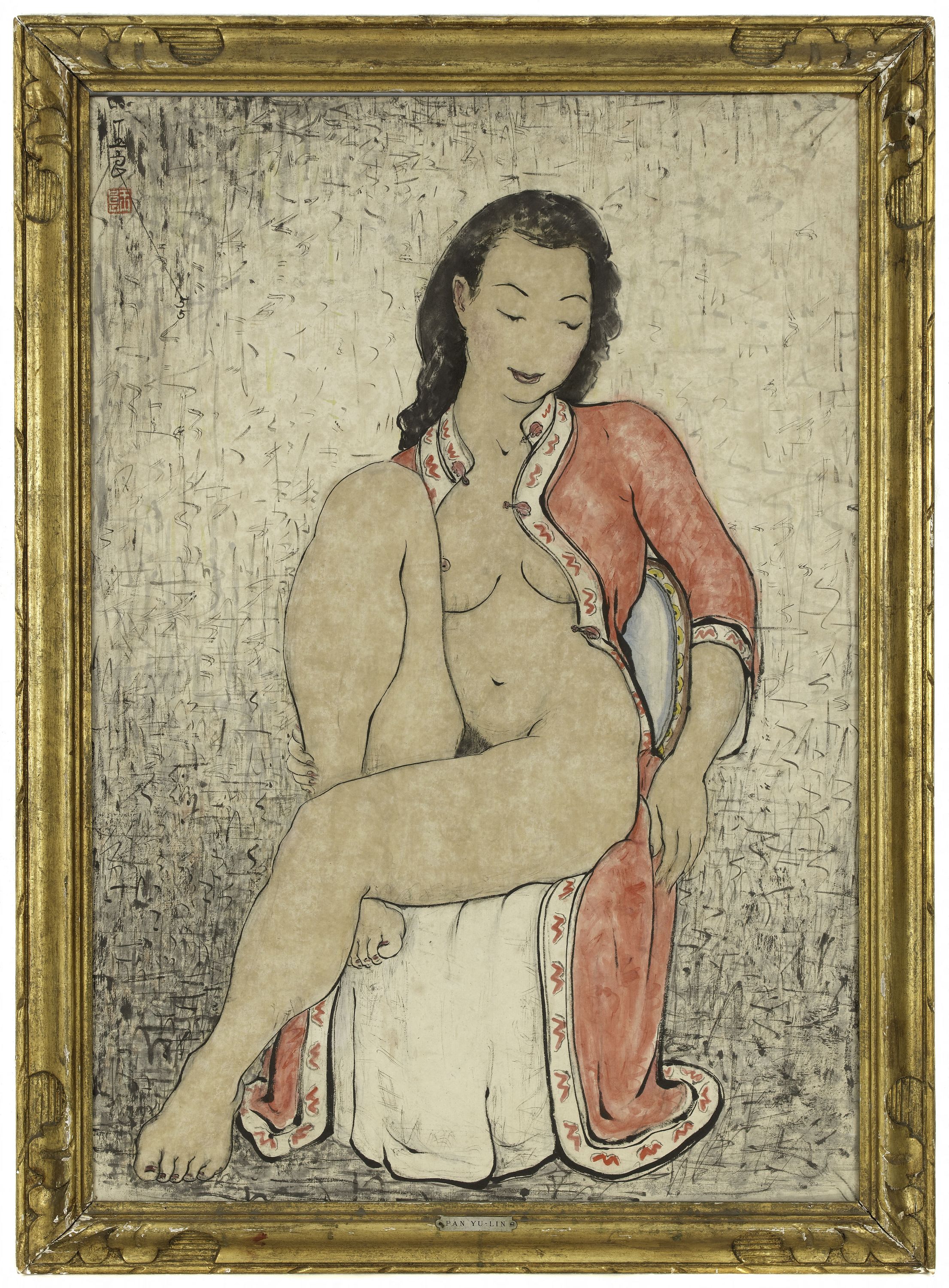 Pan Yuliang’s practice of both oil painting and ink drawing, begun almost ten years previously, resulted in the early 1950s in the emergence of a style that transcends these two techniques. The stylistic unity of her work derives from the interactions between the media with which the artist was familiar: ink painting, watercolour and oil, and, to a lesser degree, engraving and sculpture, with which she had experimented successfully. She borrows from her ink drawings the light, modulated outline of her Seated Nude in oil. Conversely, the modelling of the body in her After the Bath (on loan from the MNAM to the Musée Guimet, AM3371P) and Nude in a Red Robe, two compositions on paper, is transposed from her oil paintings, as can be seen when comparing with Seated Nude. On both canvas and paper, more or less dense coloured hatching in the background creates modulations of light that enhance the subject. This unity of style is paired with a remarkable coherence of expression in her vision of the body.
The female nude played a prominent role in Pan Yuliang’s work from the 1940s onwards. At the time, the artist was seeking to express the singularity of each of her models through their physical features. This form of realism is conveyed in the diversity of types she depicted, a diversity she probed to the point of antagonism in her painting of a white woman and a black woman side by side, in 1939. Comparison of these works with those of the 1950s reveals the profound transformation of the body image operated by the artist’s subjective gaze. The subject of her paintings was now a mature and shapely woman of medium height, always dark-haired but whose Asian characteristics were generally signalled by details in the setting rather than in her facial features. Without being stereotyped, Pan Yuliang’s women appear united by a sisterly bond, adding to the unity of her work. She abandons description of their physical singularity and instead shows them in poses that sometimes express emotions of love or maternity, but more often evoke various forms of introspection.
Among these three nudes dating from the early 1950s, two were rapidly acquired by French institutions: After the Bath joined the national collections in 1955 and the Seated Nude the collections of the City of Paris in 1958. The identity of two of the donors of the latter work, Guo Youshou and Zhou Lin, sheds light on Pan Yuliang’s particular situation on the Paris art scene. Thanks to his diplomatic status and large personal network, Guo Youshou found exhibition opportunities in Paris for his artist friends and was also behind the donation of various works, including Pan Yuliang’s Bust of Zhang Daqian to the Musée d’Art Moderne de la Ville de Paris. Zhou Lin, chairman of the Association des Artistes Chinois en France, was also a publisher. The intervention of these figures of the Chinese intellectual community reflects the esteem in which Pan Yuliang’s work was held by this circle, yet paradoxically highlights her detachment from the art market, an isolation that would affect her work from the 1960s onwards.