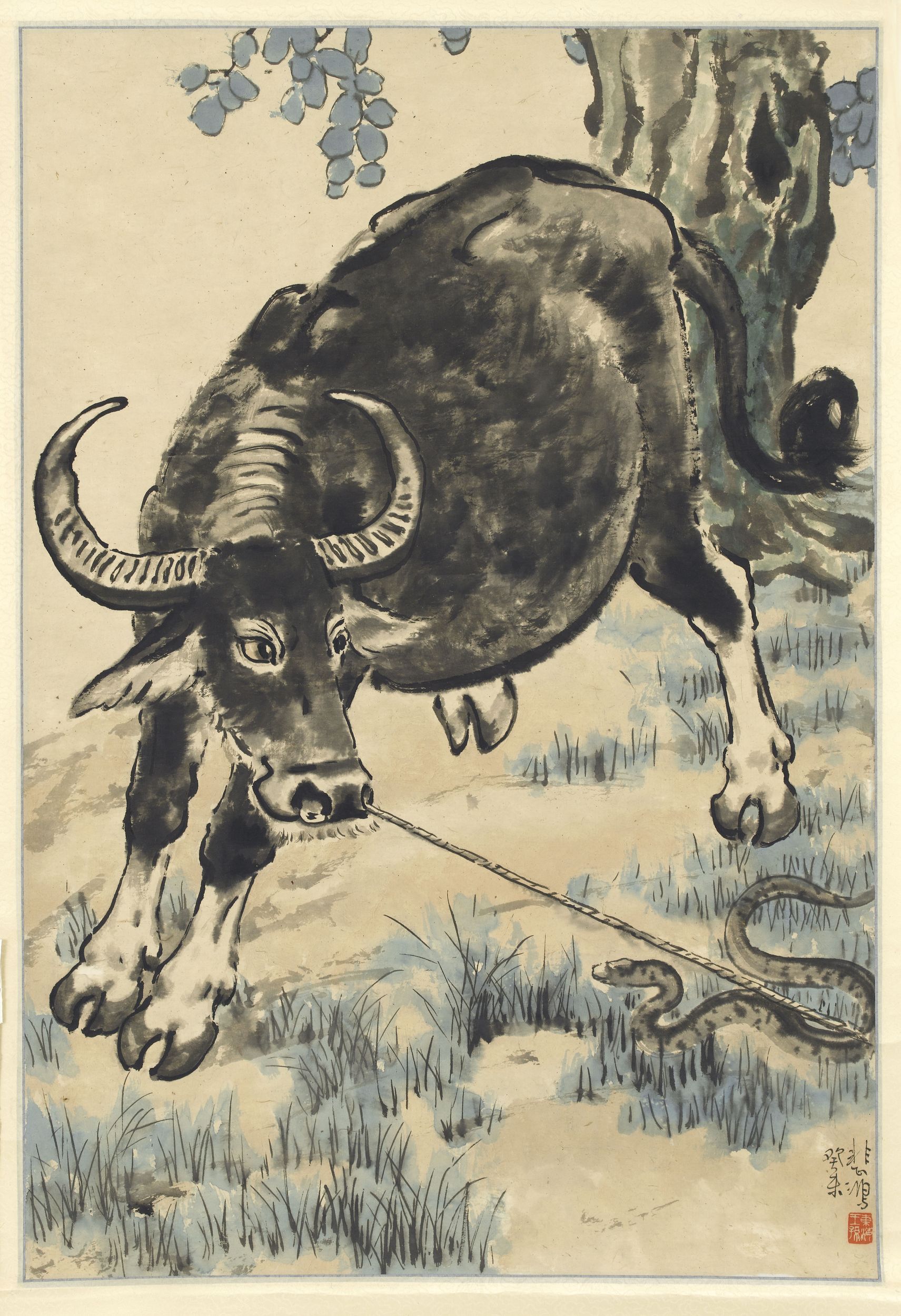 Buffalo and Snake:
Inscription on the title section: 牛鬼蛇神  “The Buffalo Demon and the Snake Spirit”
Inscription and signature : 悲鸿癸未  “Beihong, Guiwei (1943)”

Rooster and Bamboo:
Inscription and signature: 癸未歲盡悲鸿寫  “Painted by Beihong at the end of the Guiwei year (1943)”
The depiction of animals was a major part of Xu Beihong’s work. His recurrent animal subjects, including his emblematic horse theme, had a realist and sometimes symbolic dimension. His studies in pencil from his sojourn in Europe show how the animal motif contributed to his development as a draughtsman. Besides the precise rendering of the animal’s anatomy and proportions, he endeavoured to describe its movements. The admiration he expressed in his writings for Jean-François Millet and Rosa Bonheur and for the Barbizon painters shows his appreciation of realist painting of rural life, in which animals play a prominent role. In transposing his technical knowledge of drawing and oil painting to Chinese painting, Xu Beihong profoundly renewed the traditional depiction of animals. His 1936 reinterpretation of an ancient theme, the buffalo and child, is expressed in the combination of a realist rendering of the animal with a highly suggestive evocation of the landscape. In this famous work in the Xu Beihong Museum, the water buffalo’s strength is conveyed in the way it tugs on the rope held by a child lying in the grass.
The Cernuschi Museum painting, executed seven years later, makes several references to this composition. The style has evolved somewhat, because this buffalo with a snake resembles the peaceful animal serving as a mount for Lao Zi that was painted by Xu Beihong in 1943, on his visit to the Taoist monastery Dongdao guan 洞道觀. The way the tethered animal watches the threatening advance of the snake is obviously charged with symbolism. This painting is dated 1943, so the context would suggest that it refers to the Japanese attack on China. The same type of encounter between a lion and snake in a work dated 1939 is an unambiguous precedent, for the wounded lion had already been used as an allegory of China under attack in 1938.
In the same historical context, the theme of the cock, traditionally an auspicious symbol, was also used by Xu Beihong to convey a political message. The year war broke out, he produced a work inspired by a passage from the Classic of Poetry (Shijing) evoking a cock crowing in a storm. After this explicit call for national resistance, most of Xu Beihong’s works took on a patriotic flavour. The proud pose of his 1943 cock can therefore be viewed in the light of this political stance.