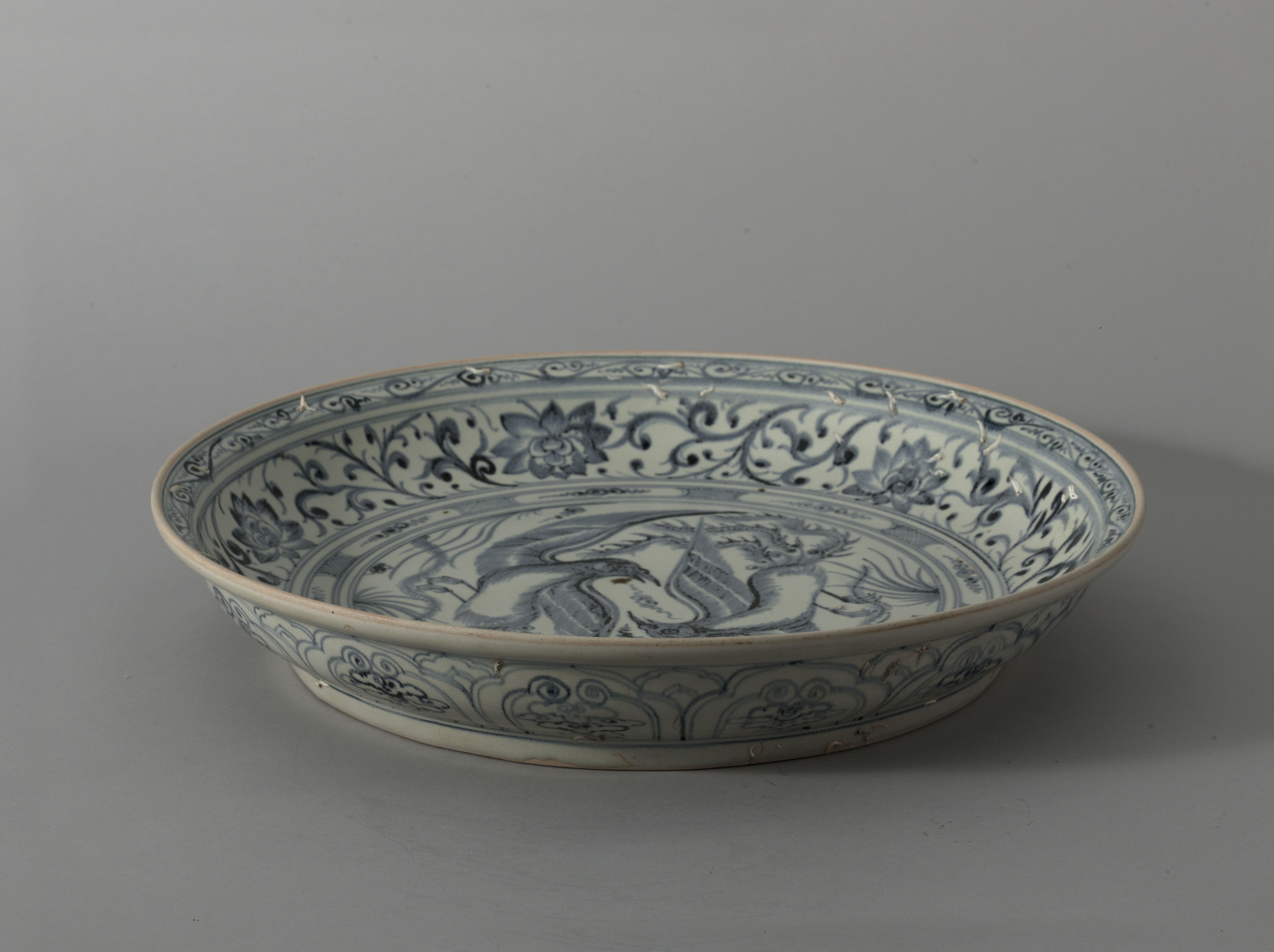 This large plate with a phoenix motif comes from the wreck of a ship that sank near Cham Island (Cù Lao Chàm), off the shores of the port of Hội An in the mid 15th century. The hold was found to contain some 250,000 intact pieces, originating from the kilns of Chu Đậu and produced for the export market. Underwater excavations were carried out from 1997. Marine lime deposits are dotted over the inner and outer walls, attesting to the underwater sojourn of this piece. In the mid 15th century, when China was the principal exporter of blue-and-white ceramics, the Ming dynasty brought about restrictions to private trade, enabling Vietnam to capture the market. Vietnamese blue-and-whites were widely distributed at the time via maritime routes, from the Philippines to Turkey and Japan.
Porcelain stone, a material rich in silica that gave a translucency produced by vitrification, was not available in the Red River basin. Vietnamese blue-and-whites are therefore made from a very pure white stoneware clay and not porcelain as in China. The decoration was painted on the dried object, which was then dipped in a transparent glaze before being fired at 1,200°C.
The decoration of this large dish consists of three concentric bands traced with a double fillet, and by the central motif, also flanked by a double fillet: two birds in motion face each other over a background of stylised branches and undulating grasses. The arrangement of the birds evokes the taijitu 太極圖 symbol, also called  “yin-yang fish”. The two birds are identical, one of them having simply been rotated 180°. The dynamic resulting effect is striking, accentuated by the birds’ open wings and beaks, twisting bodies, head and feet in opposite directions, one wing raised and the other lowered, and by undulating upward movement of their long tail feathers.
The same taijitu 太極圖 motif is also composed with fish and dragons. Here, while the compositions in bands and the style of the flowers and foliage recall Chinese works, notably those of the Yuan period in the mid 14th century, and the phoenixes borrow from their Chinese cousins the long pheasant feathers, but they look like magpies, a bird that is moreover often depicted in contemporary Vietnamese works.