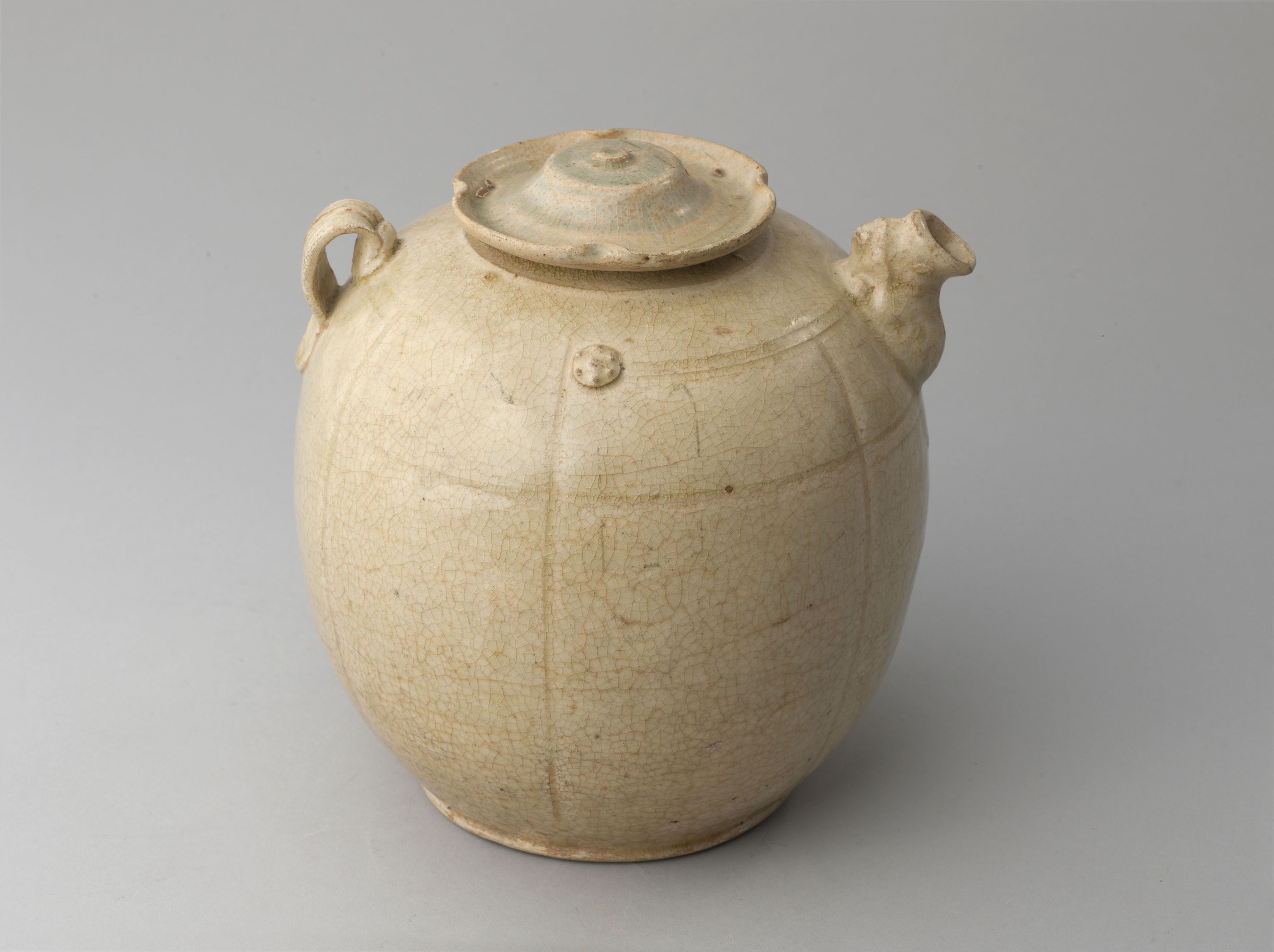 This ovoid-bellied pouring pot has six vertical grooves evoking the lobed "melon-ribbed” style that is found in more or less pronounced forms on certain Vietnamese and Chinese pieces of the same period (11th to 13th centuries).
On the shoulder on either side of the lip, at equal distance and at the same height, are the spout and the handle. Their point of attachment is underscored by two double incised fillets running around the shoulder. A third double horizontal fillet marks the place at which the belly begins to narrow towards the short, wide, circular and rimmed foot, where the glaze was wiped off.
Two flower buds in relief are set on the side of the pot at the shoulder, at equal distance between the handle and the spout, at the intersection of the upper double fillet and the vertical groove.
The spout features a stylised Makara in moulded relief whose trunk undulates upward. This transformation of a utilitarian item with a humorous citation of an element from the animal kingdom, for its similar function, is characteristic of Vietnamese ceramic art: since the Giao Chỉ (Jiaozhi) era, hu vases introduced from China were adopted and given elephant protomas for a spout.
The handle, which was attached with slip onto the shoulder before firing, is reminiscent of pouring pots from the Tang era or the An Nam period in Vietnam (8th – 10th centuries): flat and wide, with a central projection, it echoes the hammering and riveting work in objects made of metal.
The body of the pot is in very pure white clay with the slight imperfections and irregularities found in Vietnamese ware. The brilliant transparent glaze is crackled all over. Its high iron oxide content produces the very clear olive green hue where the glaze has accumulated in the incisions on the belly and in drops in the area sloping inwards to the foot.
This pourer still has its lid, a rare enough occurrence to be worth mentioning. This lid is simply placed over the narrower opening. It has a flat top with a central knob. Its wide rim is raised and pinched into four lobes reminiscent of precious metalwork and of an undulating leaf or the petals of a flower. Inside, the unglazed clay has turned a reddish colour during firing and the heat has caused a crack in the area where the clay is thicker. On the outside, the glaze has taken on a blue-green tint in the hollows where it accumulated.