The Shang dynasty occupied two successive capitals in present-day Henan province, at Erligang (in Zhengzhou) and at Xiaotun (near Anyang). The decoration of ritual bronzeware evolved from plain raised fillets to a very rich formal repertoire and more prominent relief work.

Chinese history traditionally begins with the first royal dynasty of the Xia (circa 2200-1700 BC). It was during this period that the first ritual vases in bronze appeared. While still very rare, several have been found at Erlitou (circa 1700-circa 1500 BC) in Henan province. Some archaeologists consider that the Erlitou culture corresponds to the Xia dynasty. Other sites connected to the Erlitou culture have been excavated in the regions around Henan.

The kings of an eastern tribe of China, the Shang, took advantage of the weakening of the Xia kingdom to seize power. Excavations at the fortified city of Erligang (in Zhengzhou, Henan) have produced bronzes and pottery that enable the site to be dated to the early Shang period. These items are mostly wine vessels for ritual and funerary use. The practice of drinking fermented beverages was indispensable to the worship of royal ancestors and numerous deities of a pantheon, about which little is known. Between around 1550 and 1300 BC, the capital was established in Erligang. Ritual bronzes are simply decorated with a frieze of raised fillets. Highly stylised zoomorphic motifs feature amongst the interlaced designs, such as the mask of a legendary creature (which Sinologists call the taotie), with protruding eyes under heavy eyebrows and an upper jaw with fangs, a sort of prophylactic gluttonous ogre.

In around 1300, the capital was transferred to the site of present-day Xiaotun, in the region of Anyang (Henan). The formal repertoire of the bronzes, which was much richer, included decoration in higher relief. A bestiary of legendary creatures or realistic animals featured a wide variety of motifs and styles: taotie, animal masks, kui dragons, cicadas, birds. Square spirals (leiwen) on the background evoke the ancient symbol of the character for thunder. In the late Anyang period (circa 1300-circa 1050 BC), these decorations became dense and particularly vigorous. The traditional historiography of this dynasty is partially supported by oracle bone inscriptions on animal scapula and turtle plastron.

Recent archaeological discoveries have shown that the Shang culture existed alongside other cultures, with which the Shang kings were often in conflict. One of these, occupying present-day Hunan, produced original bronzes depicting realistic animal figures and legendary beasts. Another, in Sichuan, created spectacular anthropomorphic sculptures in bronze, whose interpretation remains open to debate. 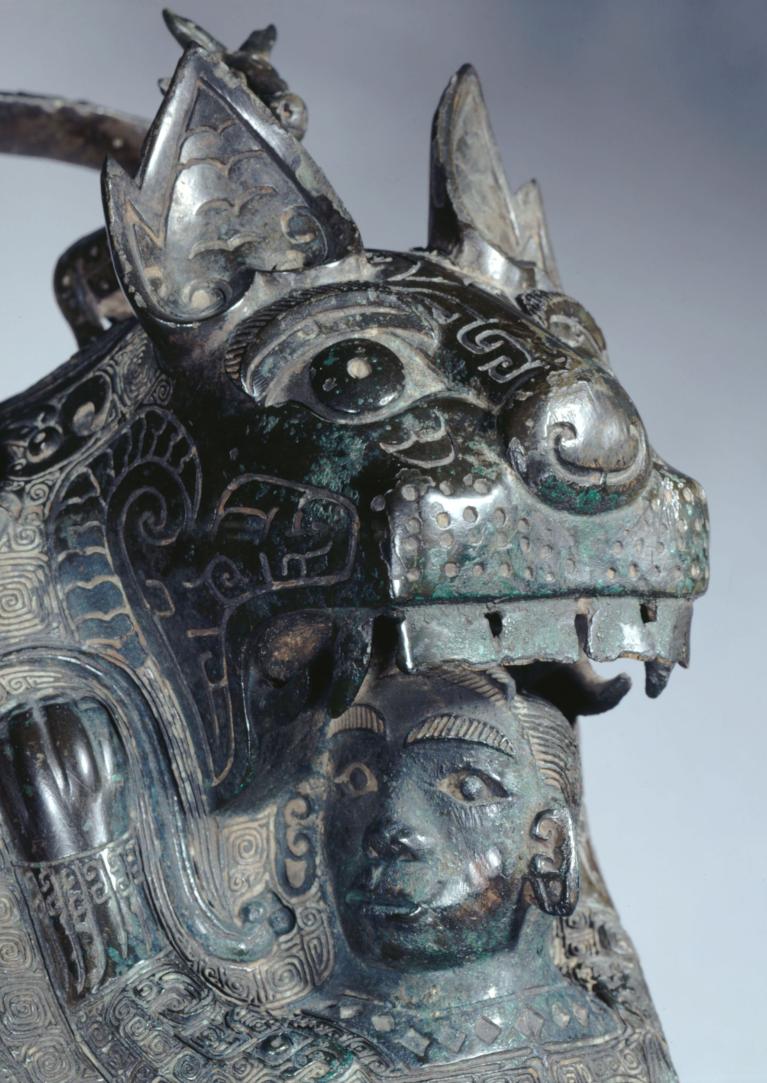